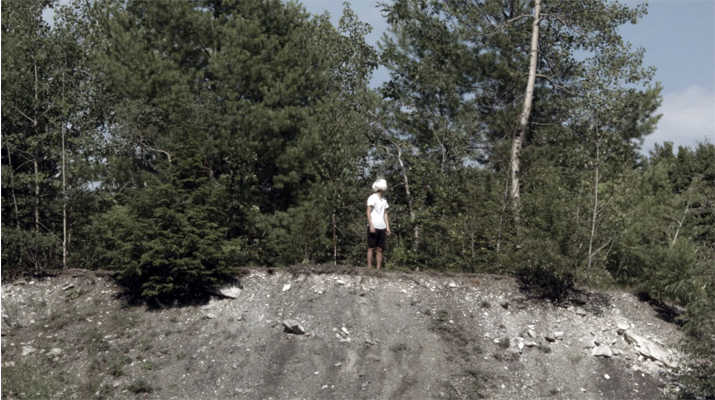 Artist Tzu-huan Lin is going to present his first solo exhibition The Yellow Snake Is Waiting at the Flux Factory. Lin moved to New York and has lived here since 2010. Not only surrounded by the intense cultural shock, Lin had to struggle for what art meant to him during his time in school. After graduation, how New Yorks always wanting something amazed Lin. The endless eager of human beings inspires him to create an immersive installation The Yellow Snake Is Waiting.

Two storylines circled around desire form the narrative of the installation, one from Chinese history Emperor Qin and the other from Bible. Entertaining with footage taken from Lin’s journal to upstate, the theme questions viewers with the universal topic: “What do you really want? What is desire?” Half of the gallery space turns into a pond, with smog to create a mysterious atmosphere. Lin as commentator in the video talks about his own interpretation of desire. “I want to explain what desire for me is. Western culture and Asian culture have their own story about desire, with different explanations. I try to combine and balance them. Maybe I could find a way to the ultimate answer.”

Lin studied Digital Art in Pratt Institute in 2010. His early practice focused on using video work to investigate cultural difference, trying to merge the influence from his upbringing in Taiwan into the mindset of western art education. Then he is interested in Internet culture and post-internet art, which trigger him to study the cultural differences from a broader and universal perspective. Like most artists based in New York, Lin struggled with the expensive living expense and competitive art scene after graduation. He has to continue creating works while doing a full-time design job. The uncertainty to the future makes him to think about what desire is and why people never stop wanting.

Tzu-huan Lin is one of Flux Factory artists in residency in 2015. The residency is also received grant from Taiwan Ministry of Culture and Taipei Department of Cultural Affairs, Taipei City Government. His current work investigates history, authenticity, memory, dream and cultural appropriation. The Yellow Snake Is Waiting is on view from August 21st to 27th at Flux Factory main gallery.

In August 1993, seven artists rented part of the second floor of a former spice factory next to the East River in Williamsburg, Brooklyn. The 1,800 square-foot space, with 14-foot ceilings, for which they paid $1,000 per month, had no dividing walls and the only source of running water was a slop sink. The group had come together as an informal artist collective to create an alternative platform to the commercial gallery scene.

The group, which soon became known as Flux Factory, was born out of the needs of emerging artists who come to New York City to take part in the cultural nexus. By 1998, Flux membership had doubled and the living room, with a new stage, evolved into a destination for art events and performances of all kinds, with supper parties and performances occurring each Thursday, a tradition, which continues with our monthly “Flux Thursdays” salon and potluck.  Flux became an official 501 (c)(3) nonprofit in 1999.

In 2002, the organization itself became ensnared in the battle for New York City real estate and was forced to move to 43rd Street in Long Island City, Queens. That same year Jean Barber is curated the first Flux exhibit and thus inaugurated the Flux Factory exhibition program.  In 2009, Flux Factory was forced by eminent domain to move to its current location, an 8,000 square feet, three stories, building in Long Island City. The new location provided an impetus to professionalize the residency program. Residents are now selected based on merits as well as on their commitment to collectivism. Today we host between 30 and 35 artists in residence per year.  Flux commissions new work through quarterly exhibitions, and residents produce public events at a prolific pace.

Title: The Yellow Snake Is Waiting