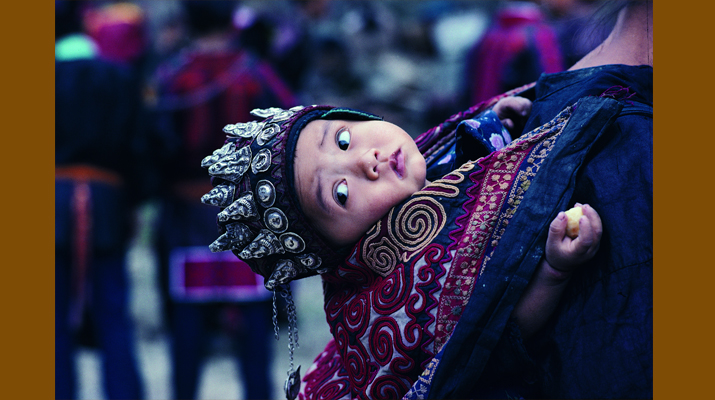 Taipei Cultural Center of TECO in New York is very pleased to present the touring exhibition Fertility, Blessings and Protection – Taiwanese and Asian Cultures of Baby Carrier. This exhibition features collections of Baby Carrier from Taiwan’s National Museum of Prehistory. The second stop of the tour exhibition held at Taiwan Academy in New York from July 29th through September 20th, 2015 with an Opening reception on Thursday, August 6th, 3:00pm, 2015.

The so called baby carriers is also know for 「Qiang Bao (襁褓)」. It is a piece of cloth which is used by parents to wrap and carry a baby. Practically, a baby carrier keeps parents’ hands from occupying. Most of all, it provide sense of safety and enhances closeness between babies and parents. It requires numerous stitch works and a lot of attentions to make a piece of exquisite baby carrier. It is an opportunity for a girl to demonstrate her handcraft and needlework among China’s ethnic minorities during their festivals every March of a lunar year because a piece of beautiful and well handcrafted carrier is always the central attention of the festival. While Han people of Taiwan’s barriers often seen consist of two parts, a towel and a quilt, which looks like a small quilt. A towel is used during a hot day, while a quilt is added for a cold day. When fabrics were rare in the past, a baby carrier was always made from remains of different garment collected from many families. It is said that the collection is a custom that is similar to make a silver necklace of a baby. It symbolizes that a baby is blessed by hundreds of families. A plain fabric or scarf is considered as a traditional baby carrier by indigenous people in Taiwan. A researcher of Tayal textile, Yuma Taru once said that Tayal believes that life is like waving cloth. Every step of life is weaving together seamlessly. When a baby was born, his/her grandmother will give a piece of baby carrier as a gift, while he/she will prepare a piece of cloth for the final step of life.

This touring exhibition features baby carriers including southwestern China’s ethnic minorities, indigenous people of Taiwan and Taiwan Hang people. Baby carriers of various styles and forms reflect differences in culture, climate, customs, habits, and aesthetics, while also manifesting shared ideas about fertility, blessings, and protection, proof that love is the universal human language. Moreover, we hope that the exquisite cultural artifacts on display will enrich Taiwan’s image as a country endowed with a rich and diverse culture.

This exhibition is organized by Taiwan’s National Museum of Prehistory and the Taipei Cultural Center of TECO in New York, this exhibition received support from the Taiwanese Ministry of Culture.