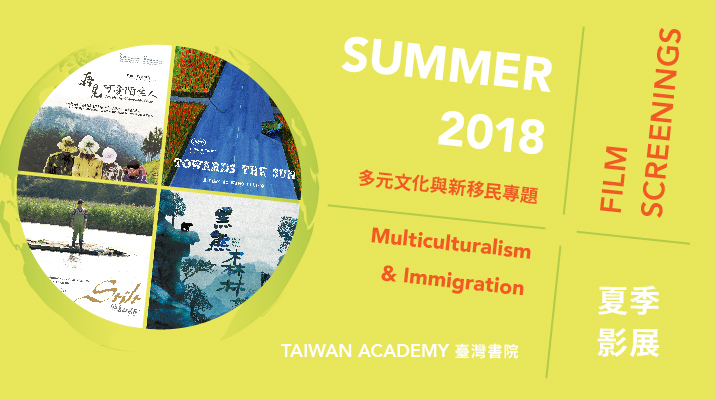 This month the Taiwan Academy in New York will present a contemporary art exhibition [和he’] and film screenings centered on multiculturalism and immigration. This series of events aim to capture the impacts of globalization on Taiwanese society through various lenses, and through the perspectives of the participating artists.

Currently, the foreign worker population in Taiwan has grown to over six hundred thousand people, yet most workers exist outside of Taiwanese society. Alongside the exhibition [he’], 3 films and documentaries: “See You, Lovable Strangers,” “Stilt,” and “Towards the Sun” have been selected for screening. All three films examine the challenges new immigrants face in Taiwan, as well as the issues of the rural-urban divide.

In addition, a fourth film “Black Bear Forest” has also been selected for this series. This film addresses the relationship between humans and the natural environment by taking the audience into the world of an indigenous tribe— the Bunun, and the life of Taiwan’s very own protected animal, the black bear.

The selected films focus on the lives of new immigrants, foreign workers, foreign spouses, indigenous peoples, and the issue of ecological protection, thus highlighting the multicultural, inclusive and innovative spirit of Taiwan in relation to its geographical position in East Asia.

【See You, Lovable Strangers 】(62 min. 2016)
This film is the sequel of the 2013 film Lovely Strangers, a film that won the Outstanding Award of the Golden Harvest Awards in Taiwan. See You, Lovely Strangers continues to concern the work experience of Vietnamese migrant workers, to examine the reasons behind their numerous escape, and to track down the family circumstances of those who were deported from Taiwan. The film is not trying to propose a solution but to generate more understanding of the life context of illegal migrant workers with first hand witness records. The film is an attempt to stimulate proper response on migrant workers’ human rights from both Taiwan and Vietnam government and to reduce unnecessary conflicts and discrimination.

【Towards the Sun】 (28 min. 2016)
A man loses his house because of a foreclosure sale, and he is forced to live in his truck. A Vietnamese woman, who only has one flight ticket and easy packages, gets on the man’s truck. They sit on the moving truck with their painful memories, follow signs directing all the way to North, and embark on adventures on the road trip. Director WANG Yi-Ling lives in Taipei, Taiwan. She graduated from National Taiwan University of Arts in Filmmaking in 2017. Her short film Towards the Sun was selected at the 70th Festival de Cannes Cinéfondation Competition and other prestigious film festivals.

【Stilt】 (108 min. 2012)
A bird expert, who watches migratory birds year after year, cannot simply be an observer to his own life. On the surface, Min is a man who lives a dream life. He has great looks, a job he is passionate about at the Taipei wild bird conservatory and a loving wife. However, the expert of the Black-winged Stilt harbours dark storms within. There is daily growing tension between him and his wife over family planning. He and his brother, who were once in good terms, have been cold-shouldering each other for years. Last is the past he left behind to soar to where he is. All tension is released and mayhem unleashed when a crisis brings him back to his old home Yun-Ling, the town he came from. Meanwhile, oblivious to the life of the man who studies them, the migratory Stilts continue their annual ritual. Hidden with their feathery actions is a message of love waiting for Min and his family to uncover.

【Black Bear Forest】 (126 min. 2016)
The story unfolds in ‘the realm of bears” that is the heart of Yushan National Park, Dafen. It is a place abundant in wildlife ecosystems and aboriginal culture. Fascinated with the area, in 1998, one female ecologist started her journey searching for bears while subsequently developing a deep companionship with a Bunun hunter in the midst of this wilderness. Together with copious research, the secret of the Taiwan Black Bear is thus revealed.
Back
返回頂端
關閉選單
Keywords: 文化部
fb youtube mail