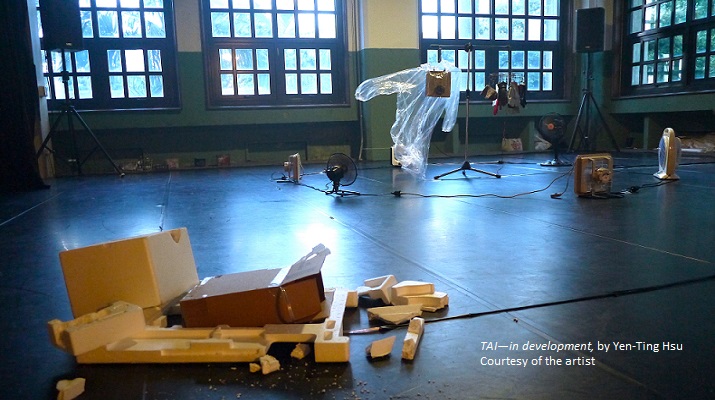 Yen-Ting Hsu and Pei-Hsuan Wang will be joining 34 artists from 21 countries currently in residence at New York’s International Studio & Curatorial Program (ISCP) to present their latest work during the Open Studios on April 27 and 28.

The ISCP Spring Open Studios is a two-day exhibition of international contemporary art presented by current artists-in-residence. Twice a year only (the second show takes place in fall), the event offers the public access to private artists’ and curators’ studios to view artwork and share one-on-one conversations.

With the sponsorship of Taiwan’s culture ministry, Hsu and Wang began their five-month residency at ISCP in March. Hsu, a sound artist, will present her new work in the making “Cycle/Recycle” during the open studios. Using recyclable objects the artist collected from her daily surroundings as sources and conductors of sound, Hsu plans to create a sound installation in which viewers can wonder around and experience the variation of sound produced by different recycled objects.

Known for using daily objects and process-driven materials to form installations that create open yet intimate narratives, Wang will present her in-progress sculptural and installation “sketches.” Wang’s work centers around mobility and borders—the overlap and ambiguity of territories, and the forces that propel malleable subjectivities to move from one space to another.

Shortly after the event opens on April 27, Tania Bruguera, whose politically and socially driven body of work has changed the landscape of performance art, will make remarks at 7pm.

Yen-Ting Hsu
Yen-Ting Hsu investigates the cultural context of sounds, explores the connection between life, environment and ethnic cultures, and reflects on the relationship between sounds and their surrounding world. Using field recordings as her primary material, Hsu creates audio documentaries, soundscapes and sound performances. She also works extensively with dance theaters as a sound designer.
Yen-Ting Hsu has exhibited at Taipei Artist Village, Fremantle Arts Centre, and Taipei Fine Arts Museum, among others.

Pei-Hsuan Wang
In her practice, Pei-Hsuan Wang reflects on the intricate ties between private experiences and the outside world in the face of globalization. She investigates the nuanced relationship between transnational, cultural, personal, and geographical identifications through installation, object-making, and image and film documentation.
Pei-Hsuan Wang was born in Hsinchu City, Taiwan. Wang has exhibited work at Taipei Fine Arts Museum; Hong-Gah Museum, Taipei, and National Gallery of Indonesia, Jakarta, among others.