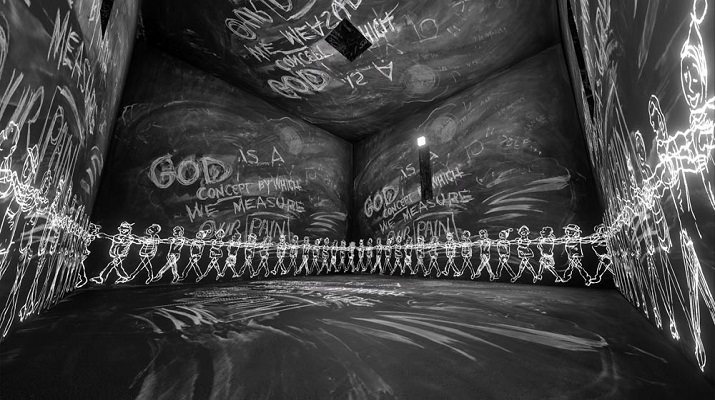 CHALKROOM consists of eight rooms in which the viewer flies through an enormous structure made of words, drawings, and stories. Inside the experience, the viewer is free to roam and fly, while words sail through the air like emails, fall into dust, and form and reform. “VR and the ‘new media’ we talked about in the past are greatly different,” says Hsin-Chien Huang, the new media creator with backgrounds in art, design, engineer and digital entertainment. “VR releases all energy hidden within the possibilities, and in a world created by VR, imagination is the only limitation.”

This boundary-pushing work has challenged the moviegoing experience and will be featured at various festivals including Tribeca Film Festival that recognizes VR as new art forms and has its immersive Storycapes and Visual Arcades programs to explore interactive storytelling. This year’s lineup includes 21 world premiere virtual and augmented exhibits, and five Storyscapes experiences in competition, running April 20-28 in the Tribeca Festival Hub located at Spring Studios. Visit tribecafilm.com/immersive for more information.