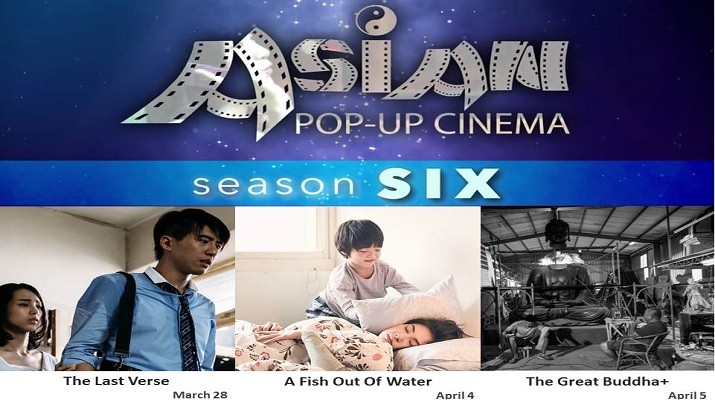 March 15, 2018 (Chicago, IL) – Taking place from March 13 through May 16, Chicago’s only pan-Asian film organization Asian Pop-Up Cinema presents within its sixth season a series of three Taiwanese films spotlighting the most innovative cinematic voices to emerge from there in recent years. The three films featured are: multiple Golden Horse Award winner THE GREAT BUDDHA+; and festival hits THE LAST VERSE and A FISH OUT OF WATER—plus filmmaker Q&As and cast appearances. This program within the season’s full run is a unique celebration of contemporary Taiwanese films and a gathering of emerging filmmakers.

Tseng Ying-ting’s THE LAST VERSE, starring Fu Meng-po, will kick off this mini-series on March 28, followed by a filmmaker Q&A. This grand melodrama follows a couple through the love and dreams of their youth as each is worn away by poverty and cruel reality in adulthood. Lead actor Fu Meng-po received Best Actor honors at Taiwan’s Golden Bell Awards in 2017.

Music-video and commercial director Lai Kuo-an’s feature debut, A FISH OUT OF WATER, screens on Wednesday, April 4. A portrait of family relationships, it’s a film about a young boy who intensifies the tension between his separating parents as he struggles with inexplicable memories from past lives. This accomplished film is the first Taiwanese title presented at São Paulo International Film Festival in Brazil since 1997.

THE GREAT BUDDHA+ returns to Chicago for an encore screening on Thursday, April 5. From writer-director Huang Hsin-yao, who won the best new director at Taiwan’s Golden Horse Awards in 2017, this acclaimed feature film is expanded from a short film. This compulsively watchable drama was the winner of NETPAC Award at TIFF and Variety said it is “arguably the best film to emerge from a year of exciting resurgence in Taiwan.” Filmmaker Huang Hsin-yao will be in attendance for a post-film Q&A.

As Chicago’s only pan-Asian film festival, Asian Pop-Up Cinema is a semi-annual film series that shows a series of specially curated films from across Asia to foster appreciation for diverse Asian cultures. Alongside the Taiwan Cinema program, this season’s festival presents sixteen of the most acclaimed new Asian films at AMC River East and select cultural organizations around the city. For the full lineup and schedule, visit www.asianpopupcinema.org.