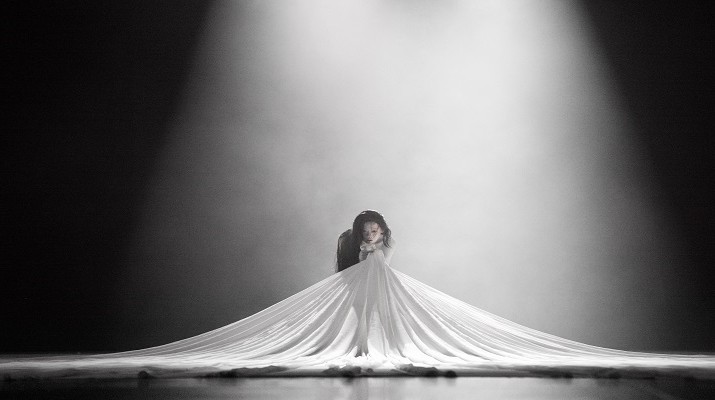 Legend Lin Dance Theatre is world-renowned for its style of ritual theatre, was founded by Lin Lee-Chen, one of the World’s Eight Greatest Contemporary Choreographer selected by European television station ARTE in 2002. After the Trilogy of Heaven, Earth and Man in the Mirrors of Life, Anthem to the Fading Flowers, and Song of Pensive Beholding, her latest dance work “The Eternal Tides” was premiere in 2017.

The Eternal Tides is a momentous occasion—an adventure in beauty. In the worldwide debut, choreographer Lin Lee-Chen folds age-old rituals, customs and ceremonial rites into her radical vision, and the result is epic. The show is, above all, a tribute to water: the ocean that encloses the island of Taiwan, and the cycle of renewal it is part of. Using song, dance and striking stage design, Lin evokes the mythology of these elements. You might call it spiritual environmentalism—a tribute to nature as it was, and might be again.

With its large ensemble of dancers and musicians, the show has an intoxicating power. Lin carries us through a procession of vivid tableaux; the imagery evokes myth and human reality in equal measure. The costumes and sets are stunning: fabric and silver grass, red-tinted figures and shocks of white, composed with flair and delicacy. At once austere and sensual, intimate and monumental, this show will leave you awestruck.

About the Choreographer
LIN Lee-Chen founded Legend Lin Dance Theatre in 1995 with the aim of presenting large-scale dance works that reflect the native spirit and culture of Taiwan. Inspired by local religious rituals and ceremonial rites celebrating the rhythm of nature and our place within it, the art of Legend Lind Dance Theatre blends a lush visual aesthetic with brilliantly original choreography that creates new meaning to the concept of “poetry in motion.” With many appearances abroad, the dance troupe has won acclaim and praises from cities and the audience alike with its works: Song of Pensive Beholding, Anthem to the Fading Flowers, Mirrors of Life and Eternal Tide.