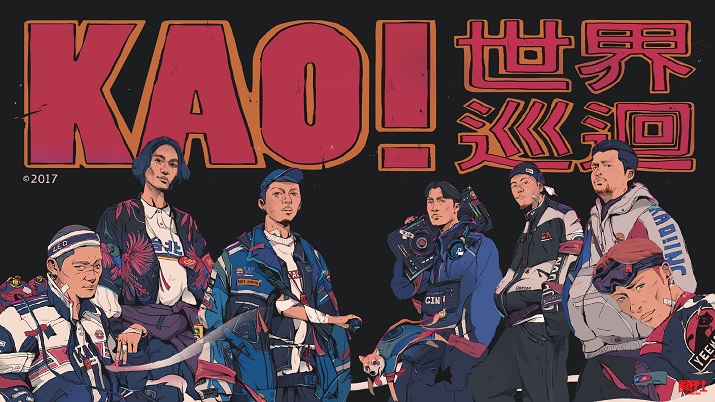 KAO!INC., the legendary hip-hop label from Taiwan is making its first North America appearance this November.

All of the artists from KAO!INC., including the label's founding artist Soft Lipa, the king of underground rap world GorDoN aka Dr.Paper, the multi-talent representative Yinghung aka DJ Didilong, and the popular hip-hop newbie Leo Wang will all be participating in the KAO!INC. World Tour showcase.

The Coast to Coast - LA to NYC shows, the four groups from KAO!INC. will bring out the best and the most unforgettable performance. Besides the classics, they will also present new tunes that have yet been released.

The KAO!INC. World Tour will make nine stops in different cities around the globe. The tour kicked off in Kaohsiung, Taiwan, with a thousand tickets sold out in minutes. The tour continues with Los Angeles and New York. And this will be the first time that this well-known label from Asia sets foot in America. Please be ready, as KAO!INC. is coming to you.

KAO!INC. is a legendary hip-hop label based in Taipei, Taiwan. The independent label was founded in July, 2005 by Dela. Throughout the years, the label has housed several successful Taiwanese rappers and recruited them with professional music production teams to make music. Moreover, the label has put a lot of effort on seeking new talents in the hip-hop scene. It has cultivated many young artists with great potential. KAO!INC. has released more than 19 albums from past to now; there are currently five artists signed under the label, including Soft Lipa, GorDoN, Yinghung aka DJ Didilong, Yeemao and Leo Wang.

蛋堡 Soft Lipa
Soft Lipa is a rapper from Tainan, Taiwan. When he was in high school, he was heavily influenced by fellow Taiwanese rapper, MC Hotdog. Later on, Soft Lipa started to compose and make music on his own. He is known for his unique and relaxing music style, which formed a new genre called “Soft Hip-Hop.” After accepting the invitation from KOA!INC’s founder, Dela, to join the label, Soft Lipa has released 5 albums. Among all, the album “Secret of His: Renovate”(2013) has received 3 nominations in the 2014 Golden Melody Awards.

國蛋 GorDoN aka Dr. Paper
GorDoN, also known as Dr. Paper, is a rapper from Tainan, Taiwan. Eminem and the East Coast rapper, Nas, are his major influences on becoming a rapper. Gordon joined Bamboo Gang when he was in senior high school, and released “The Mixtape” with The Huangs in 2006. A year later, Gordon joined KAO!INC. Since then, he has sold out all of his five mixtapes releases. Last year, Gordon released his fifth mixtape “Sunday Night Slow Jams” and finished touring in 12 cities in China.

李英宏 Yinghung aka DJ Didilong
YINGHUNG, as known as DJ Didilong, learned how to compose when he was sixteen years old. Before going solo and joining KAO!INC, he released album “Da Xi Men” as a group with his partners under Forward Music, the largest record label in Taiwan. Yinghung is known for his rapid rapping style and being extremely talented musically. His first album “Taipei Didilong” was release in 2016.

Leo王 Leo Wang
Leo Wang is a rapper and songwriter based in Taipei, Taiwan. At the age of 18, Leo began playing in indie rock band “Gigantic Roar.” As time went by, he developed passion for hip hop and started rapping. His song ”Set That Shit On Fire” was nominated as Best Hip-Hop Song in GMA. Moreover, because of his own rapping skill and unique performance, he has been catching a lot of attention. His first hip-hop album “Artists’ Mood” was released in Dec, 2016, and the single “Weekends With You ft. 9m88” became a major hit on the Internet. Besides his solo work, Leo formed the hip-hop duo “Yeemao” with Chunyan, whose debut album will release in Sep, 2017.

DJ Mr. Gin
Mr. Gin, a professional DJ from Tainan, Taiwan, was a member of the rap group "E.A.C." He started focusing on becoming a Disc Jockey after he served the military, and has worked at numerous well-known nightclubs in Taipei. In 2009, DJ Mr. Gin, DJ Afro and DJ Kid formed “A.K.G.” to participate in the DMC competition, they won an overwhelming victory in DMC preliminary competition, and represented Taiwan to join the world competition in England. Mr. Gin is very experienced and has performed in all part of the world. His music style is natural; his scratch skills is unbeatable, and he is many hip hop company's partner, including KAO!INC, Truecolor, KUNG FU Entertainment.
Back
返回頂端
關閉選單
Keywords: 文化部
fb youtube mail