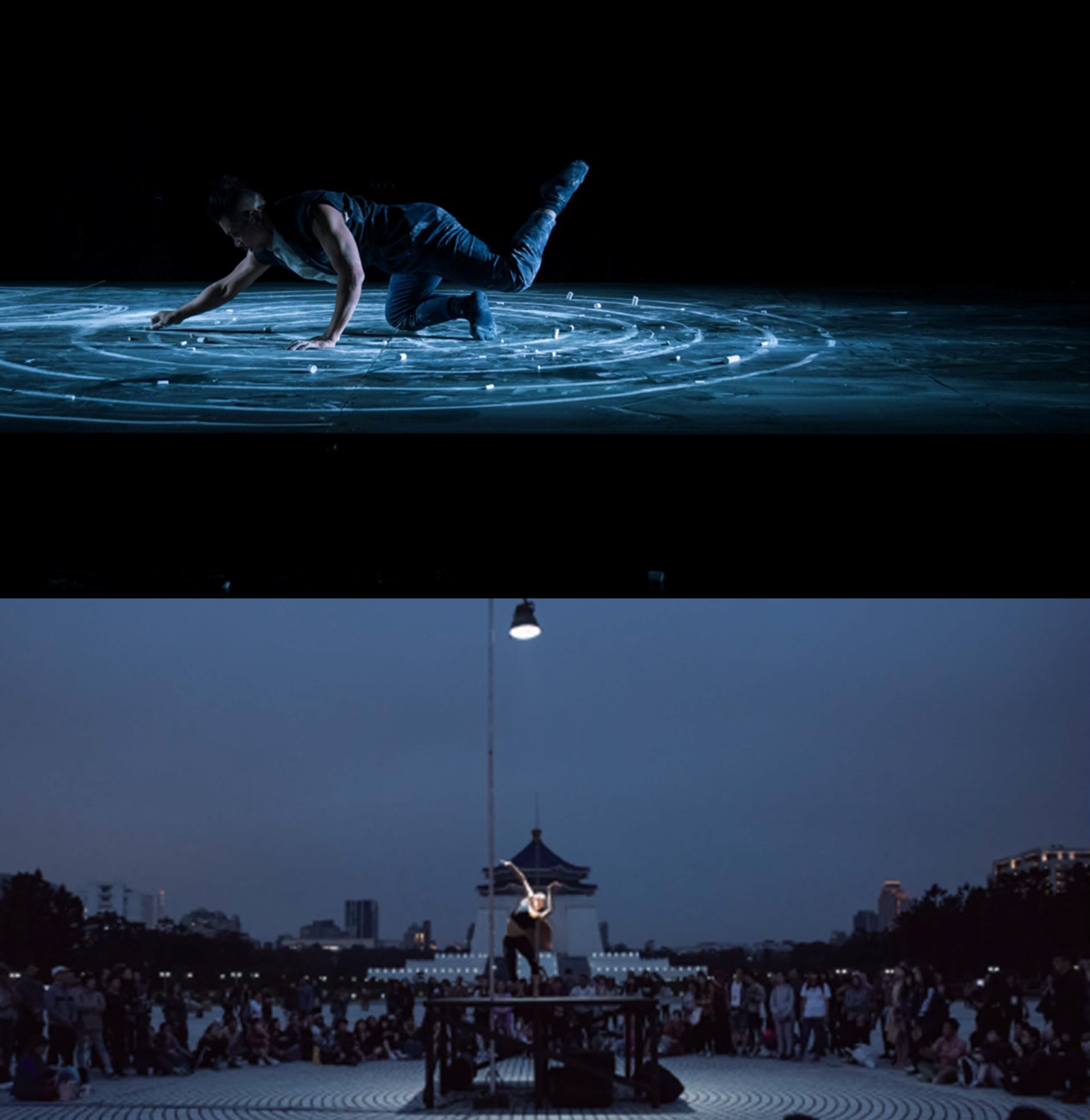 • In Touchdown 《觸底的形色》, mathematician-turned-choreographer Hao Cheng (鄭皓)uses the stage as his
chalkboard in a solo that explores quantum physics through repetitive circular motion [Taiwan].

• FreeSteps – NiNi 《自由步－一盞燈的景身》, created by the founder and choreographer of HORSE, Wei-Chia Su (蘇威嘉), performed by Yu-Ting Fang(方妤婷). In this solo dance project, audiences encounter dancers under street lights in the city, where all of the elements, including the temperature, lighting and landscape at that time as well as passersby, become materials for the dancers’ creation. [Taiwan]

Touchdown will be presented in two performances: Friday, January 14 and Saturday, January 15 at 7:30pm. On both nights, audiences are invited to arrive by 6:45pm to watch a special solo performance in the Society’s lobby titled FreeSteps – NiNi, choreographed by Wei-Chia Su — the founder of one of Taiwan’s most-celebrated dance companies HORSE. Attendance is limited to a maximum of 120 observers at this time; no admission is required.

Tickets & Information:
Performances are Friday, January 14 at 7:30pm* and Saturday, January 15 at 7:30pm†.
Tickets are $30 / $25 Japan Society members.
* followed by a MetLife Meet-the-Artists Reception
† followed by an Artist Q&A
Tickets online at www.japansociety.org

FreeSteps – NiNi is a piece that Wei-Chia Su created in the sixth year of his ten-year-long choreography project to create dance outside of the confines of a theater. In this project, audiences encounter dancers under street lights in the city, where all of the elements, including the temperature, lighting and landscape at that time as well as passersby, become materials for the dancers’ creation.

The dancers’ physical bodies stretch and curl in merriment or pain depending on the surrounding stimuli.Like a living sculpture garden, the dancers’ differing physiques and movements are highlighted by the stark shadows cast on their bodies. For Japan Society’s presentation, ticket holders and the general public are invited to arrive at 6:45 pm to watch a solo performance of FreeSteps – NiNi, performed in the Society’s lobby. Attendance is limited to a maximum of 120 observers at this time.

Wei-Chia Su, born in Kaohsiung, in 2004 co-founded HORSE. His numerous choreographies and collaborations include the group-created work Velocity, a winner of the 6th Taishin Arts Awards; and the autobiographical piece 2 Men, a collaboration with Wu-kang Chen, and the First Prize winner and Audiences' Choice winner of the 2013 Kurt-Jooss-Preis. His ongoing FreeSteps project, launched in 2013, explores the relationship between contours, movements, characters, rhythm, music, and light; a performance at Les Hivernales - CDCN d’Avignon was described as “a succession of shocks that drive the imagination into obscure and delicious depths.”

Touchdown is a solo performance combining monologues and dance, performed by mathematicianturned-choreographer Hao Cheng. The work, first performed in 2019, uses quantum physics as an analogy for life in its portrayal of the choreographer’s personal struggles and breakthroughs. In Touchdown, Cheng’s unique background in mathematics gives him perspective on both the abstract concepts and flesh-and-blood performative elements of this dynamic solo — a quietly thrilling meeting of popular science and the poetry of motion. Featuring a blackboard-like surface and chalk, Cheng ceaselessly charts his nimble, emotive movements; his dance gradually transforming the space into a visual art installation. A highly personal and intentionally low-tech examination of the seemingly unresolvable contradictions of being alive, this elegantly-conceived show gives quantum physics and the uncertainty principle fresh meaning and a human face.

Hao Cheng established Incandescence Dance in Taiwan in 2019. His company creates contemporary dance works that explore the poetry of motion with scientific and mathematical thinking. Science and art are often seen as two separate cultures, yet the founder Hao Cheng’s pursuit of science and art both stem from his curiosity towards the world. That curiosity is the drive behind all human activities. Beyond the complicated language of physics and mathematics, the poetry of science can be as accessible and enjoyable as the art, and the company Incandescence Dance wishes to reveal that through dance.