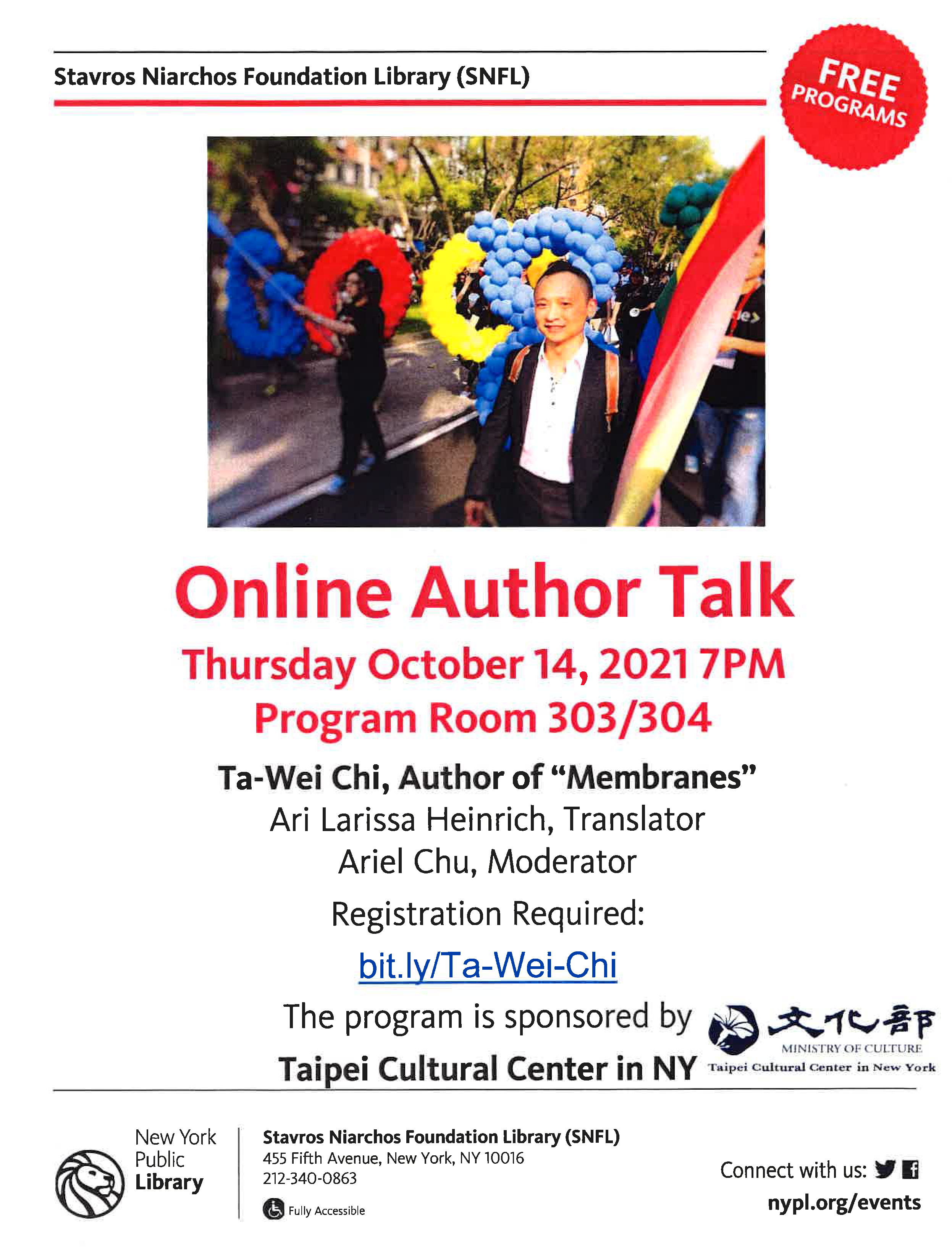 The Taipei Cultural Center and New York Public Library are pleased to co-present an Online Author Talk: Chi Ta-Wei about his novel, THE MEMBRANES.
♦Date
Thursday, October 14, 2021, 7 - 8 PM (End times are approximate. Events may end early or late.)
♦Location
Online Meeting via Zoom
﻿
In-Person: Stavros Niarchos Foundation Library (SNFL) Program Room 303/304
♦Program
The program moderator, Ariel Chu, will interview Ta-Wei Chi, whose novel The Membranes was published in English recently, and Ari Larissa Heinrich , who is the translator of the book.
**This event is held both online via Zoom and in-person at the Stavros Niarchos Foundation Library . The author, translator, and moderator will not be present in-person, they will be joining online via Zoom. We will be screening the online event in rooms 303 and 304 at Stavros Niarchos Foundation Library.
♦About the Book
There’s something very timely about [The Membranes'] play with gender fluidity and the social construction of identity. There’s also something timeless about Chi’s future, because of how it bends and defies time itself. The novel is about how identity is a story we tell ourselves through time — or back through time. And that story, for Chi, is queer . . . English readers who finish it now, 25 years after it was first published, may regret finding it so late, and missing out on all the stories and selves we could have been, even as it seems like it’s been here the whole time.
~Los Angeles Times
"First published in Taiwan in 1995, The Membranes is a classic of queer speculative fiction in Chinese. Ta-Wei Chi weaves dystopian tropes—heirloom animals, radiation-proof combat drones, sinister surveillance technologies—into a sensitive portrait of one young woman’s quest for self-understanding." (Publisher summary, published by the Columbia University Press in New York.)
♦About the Author
Ta-Wei Chi is a queer science fiction writer in Taipei. His science fiction novel, The Membranes, originally published in Chinese, is available in Japanese, French and English. His science fiction story collection, The Pearls, is available in France. With a PhD in Comparative Literature at UCLA, he is associate professor of Taiwanese literature at National Chengchi University in Taipei, where he teaches LGBT studies and disability studies. His monograph in Chinese discusses LGBT and literature in Taiwanese history from the 1960s to the new millennium.
♦About the Translator
Ari Larissa Heinrich is a Professor of Chinese literature and media at the Australian National University. He is the author of Chinese Surplus: Biopolitical Aesthetics and the Medically Commodified Body (2018) and other books, and the translator of Qiu Miaojin’s novel Last Words from Montmartre (2014). He translated Ta-Wei Chi's novel The Membranes into English.
♦About the Moderator
Ariel Chu is a Taiwanese American writer from Eastvale, California. In 2020, Ariel received her MFA in Creative Writing from Syracuse University, where she served as the co-Editor in Chief of Salt Hill Journal (Spring 2019 to Spring 2020) and received a 2019 P.D. Soros Fellowship for New Americans. This year, Ariel is a visiting Luce Scholar at National Chengchi University in Taipei, where she is researching contemporary queer Taiwanese literature. From Fall 2021, Ariel will be a PhD candidate in Creative Writing and Literature at the University of Southern California, where she intends to finish her novel with the support of a Steinbeck Fellowship.