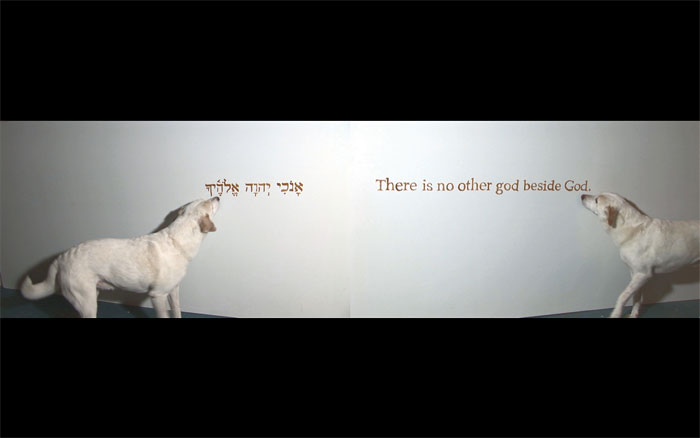 Virgil de Voldere Gallery is pleased to present Canine Monk, our first solo show with the Taiwanese artist Hung-Chih Peng. A white dog appears mid-screen and begins to lick a white wall. With each lick, words emerge and a sentence becomes clear: And God said. Once the sentence is completed with pacing and rapid tongue movement, the dog bows his head and recoils backwards out of the frame only to reappear a moment later and write: Let us make man in our image, after our likeness. In the Canine Monk series, Peng writes words from religious texts in oil and covers each letter with ground dog food. After the dog licks the wall clean, the process is repeated. The act of writing is non-linear, sometimes fervent, but the methodical repetition fosters an almost pensive tranquility. These works are intimately bound to the technology of video; when the common feature of rewind is used, the role of the dog changes from instinctive creature to creative agent. The videos also thematize another 'rewind'; god is dog in reverse. Peng began the series with Buddhist, Taoist and Hindi religious scriptures. Several of these pieces address the unity of human kind and nature. Since these texts are inscribed in their language of origin, the Western viewer is left to first contemplate them on formal terms alone. Only when the sentence is completed do the English subtitles appear. In this way, the videos often nimbly shift from the exasperation of incomprehension to the great satisfaction that occurs when understanding is finally achieved. Upon living temporarily in New York, Peng became interested in exploring the foundational texts of Western religions. He was especially struck by the many linguistic and thematic commonalities between Islam and Christianity. "Ten Commandments and Islamic Exegesis" is a dual-screen projection. On the left, the dog marks the Ten Commandments in Hebrew, while, on the right, almost identical quotes are excerpted from the Koran - only here, they are written out in English. The English writing makes the Islamic text seem the most familiar and readable of the two for the average American audience. Using the most unbiased of arbitrators, Peng continually aspires to create a medium for cultural translation. At once innocent creature, inferior species as well as trusted companion, the dog holds an ambivalent position as conveyer of sacred texts. While the artist William Wegman often dresses up his dogs and positions them in anthropomorphic scenarios, Peng's four-legged companion is elevated to performing subject, thereby displacing its human counterpart.

The dog intervenes between reader and text, thereby defamiliarizing its content and raising issues that often otherwise remain opaque: Who is the writer behind these scriptures and to whom are they addressed? When delivered via the mouth of the dog, these words, strangely, seem all the more human.