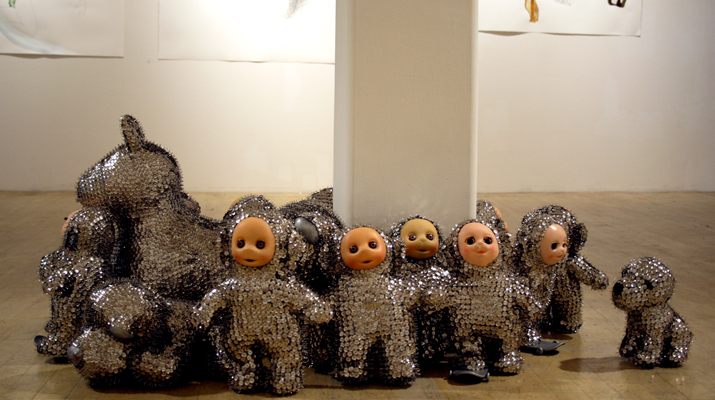 The third part of the exhibition Frolic: Humor and Mischief in New Taiwanese Art will open on Tuesday night, November 6, 6-8 pm at the Taipei Gallery, Taipei Cultural Center, 1 E. 42nd Street, New York City. The exhibition at Taipei Gallery will be on view through November 30 and features works by the following artists:

Frolic: Humor and Mischief in New Taiwanese Art will bring a sense of fun with a touch of mischief to the fall art scene in New York City. The exhibition will open at three New York spaces in October, and November, 2007. This exhibition, co-curated by Dr. Thalia Vrachopoulos, based in New York, and Jane Ingram Allen, based in Taiwan, features works in all media by 27 emerging Taiwanese artists.

Each gallery will highlight the works of different artists, including several site-specific installations to be created by some of the artists upon their arrival from Taiwan. The theme of this exhibition, humor and mischief, reflects one of the main qualities of contemporary Taiwanese art production. The sense of fun and mischievousness exhibited in the new Taiwanese art distinguishes it from others such as the Korean, which is much more serious in its tenor and themes. An example of an artist using these elements is Wenfu Yu, who deploys feathers with which to create environments that speak to the lighthearted child in all of us. They are light and fantastical configurations that arouse our instinctual desire to play, such as his Words of Bamboo, 2007, (site specific installation, feathers and mixed media), done for the Taipei Gallery lobby. Another artist who uses humor in works that address both feminist and artistic issues is Agi Chen. This artist uses color discs in symbolic sequences that correspond to heroines known from popular culture, such as Winnie the Pooh, Sailormoon and the Powerpuff Girls, Mr. Incredible and Elastic Girl. Chen deconstructs the colors and by abstracting the characters to color circles, she reconstructs their meaning to reflect on issues of consumerism and regional preferences. Howard Chen groups little creatures that appear to invade the corners of the gallery, but who belie their innocent glittery appearance when observed in detail. The Babies, 2003 is a grouping of dolls and hearts composed of silver sequins and pins that juxtapose the quintessential baby with the dangerous object, the pin.This combination is grounded in the Dada spirit of exploring seemingly innocent constructs, (the baby, for example), while using irony to pun popular conceptions. It is these and 21 other artists' creative productions that give this show an edge that will contribute to the climate of its time and leave an indelible impression upon global audiences.

Dr. Thalia Vrachopoulos, known for her expertise on contemporary Asian art and for curating many exhibitions in this field, traveled to Taiwan in 2006. There she was introduced to the contemporary art scene of Taipei at such places as the Museum of Contemporary Art, VT Salon, Hua-shan Art Center, IT Park Gallery, and other alternative art spaces. She was impressed by the quality of the work, the fresh approach and sense of fun expressed by these artists and wanted to present this new work from Taiwan in New York. She approached the Taiwan Council for Cultural Affairs for support of the exhibition and teamed up with American artist and independent curator Jane Ingram Allen, who is based in Taiwan. Allen, an artist and independent curator and art critic, has been working in Taiwan since arriving there in January, 2004 with a Fulbright Scholar Award. During the three-plus years Allen has been living in Taiwan, she has met many young artists and worked in all parts of the country. Allen and Vrachopoulos have been working together to select the works for the exhibition and coordinate activities in Taiwan and New York City.

A fully illustrated catalogue of 78 pages will accompany the exhibition with essays by Jane Ingram Allen, Thalia Vrachopoulos and Jonathan Goodman. It will be available at all three galleries during the exhibition schedule.

Other artists in the exhibition who exhibited works at 2 x 13 Gallery and Tenri Gallery include the following: