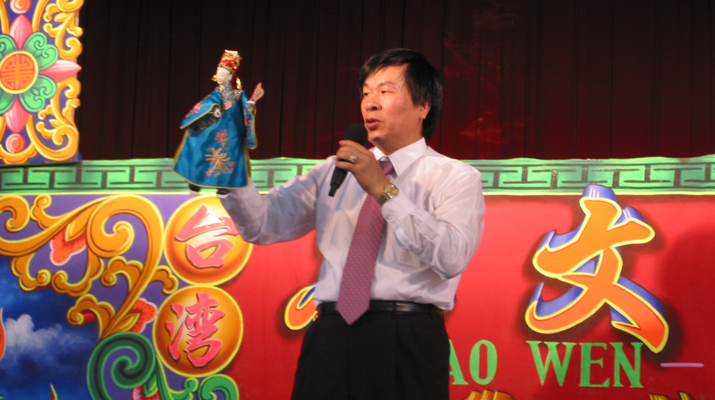 Liao Wen-Ho Puppet Theater of Taiwan is sponsored by the Council for Cultural Affairs in Taiwan and the Taipei Cultural Center on TECO in New York to perform at the Freer Gallery of Art and Arthur M. Sackler Gallery in Washington, DC and Harrisburg Open Stage in Pennsylvania from June 21 to June 24.

Liao Wen-Ho Puppet Theatre will present performances of "Journey to the West" which is based on the tale of Tripitaka's Pilgrimage to India and portrays magic and mystery of Ancient Time.

Liao Wen-Ho Puppet Theatre was founded in Taiwan in 1976. Mr. Liao Wen-Ho is known for his integrating the traditional arts forms and contemporary elements into his creation. He utilizes multi-media, audio, lighting, and visual effects to create a splendid spectacular on stage. As a master puppeteer, Liao's virtuoso narrative technique breathes lives into the puppets and makes them alive from the printed pages.

Distinguished from other traditional Taiwanese Puppet troupes, Liao Wen-Ho Puppet Theater is dedicated to preserving the traditional puppetry skills as well as inventing new style figures. In its US premiere, the Theater will use traditional puppets to perform "Journey to the West" and oversized puppets in other repertory "Brave Guy". The audiences will have the opportunity to learn about the unique culture of Taiwanese puppetry.

Mr. Liao Wen-Ho has been promoting puppetry arts on radio and television. His achievements in creating and advancing "Ching Guang puppetry" style, accompanied by pop music, special effects and computer animations are highly recognized. In 1999, Liao Wen-Ho Puppet Theater won the Global Chinese Culture & Arts Award, and later received the 1st Cultural Award by the Council for Cultural Affairs of Taiwan in 2000. The Theater also won the Yunlin 1st Cultural Award in 2003 and several national awards for outstanding achievements in folk theater.

In recent years, through the endeavor of Liao Wen-Ho and his two sons Liao Chian-Sheng and Liao Chian-Shun, Liao Wen Ho Puppet Theater has successfully introduced the arts of puppetry to all over the world. The Theater has toured to Korea, Canada, Macao, Fu-jian Province of China, Paris, Belgium, Luxembourg, Germany, Switzerland and the Netherlands. The Theater performs to sell-out audiences wherever they go, it is looking forward to entertaining and reaching out to the American audiences during their US tour.
Back
返回頂端
關閉選單
Keywords: 文化部
fb youtube mail