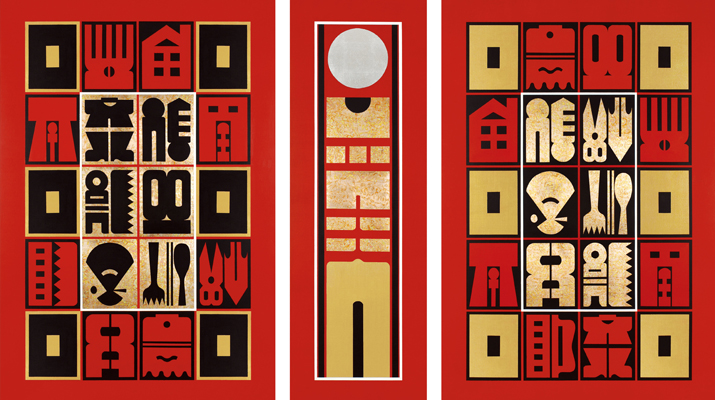 The Asian Arts & Culture Center at Towson University presents Taiwan's Three Masters of Modern Art Exhibition from Saturday, Nov. 1 - Saturday, Dec. 13 in the Center for the Arts Asian Arts Gallery located on the corner of Osler and Cross Campus drives. The opening reception is Saturday, Nov. 1, 3 to 5 p.m., and is free and open to the public. This program is made possible in part by the Council for Cultural Affairs, Taiwan, ROC, in collaboration with the Taipei Cultural Center of TECO in New York.

Rooted in the fashions of the twentieth century, yet grounded firmly in tradition, modern Taiwanese art boasts a history of surprising diversity and change. In the face of increasing Western influence, artists completely broke with tradition and embraced the avant-garde movement of the 1960s. Among them are Liao Shiou-Ping, Lee Shi-Chi and Chu Wei-Bor, three celebrated artists who have developed distinctively individual styles through decades of exploration and innovations, successfully making breakthroughs in their quest to keep up with modernism while holding on to their roots in Taiwanese heritage and Chinese influence. This joint exhibition displays works on paper, canvas, wood and lacquer.

Liao Shiou-Ping graduated with a B.A. in Fine Arts from the National Taiwan Normal University in 1959. He published his book The Art of Printmaking in 1974, which has become a textbook for printmaking study. He served as an adjunct professor of Art at Seton Hall University in New Jersey for 12 years before he returned to Taiwan as a visiting professor at the National Institute of the Arts. Liao has held more than 70 solo exhibitions in New York, Paris, Tokyo and other major cities around the world. - more - His works have been collected by museums in over 40 countries including the British Museum in London, the Metropolitan Museum of Art in New York, and the National Museum of Modern Art in Tokyo. Liao works with oils, watercolors, acrylics, and mixed media.

Lee Shi-Chi studied arts in Taiwan Normal College from 1955-1958. He co-founded the Modern Print Association and participated in international exhibitions joining the avant-garde Painting Association of the East. The most representative of his art in his early phase is a series of paintings inspired by the art of Chinese calligraphy. He uses color in various media, such as ink, print and lacquer. He received numerous awards and has held over 40 solo exhibitions in galleries and museums around the world.

Chu Wei-Bor became a painter in the early 1950's and joined the avant-garde Painting Association of the East and began to produce abstract expressionist work. He utilized found materials such as nails, cardboard, foam and plastic discs, and fabric to create multiple layered surfaces. Chu has held over a dozen solo exhibitions and has been featured in over 40 group exhibitions in museums and galleries in Europe, South America, Asia and the United States.

Gallery hours are Monday through Friday 11 a.m. - 4 p.m. and Saturday 1 - 4 p.m.
Electronic images are available upon request. For additional information, please call 410-704-2807. The exhibition and opening reception are free and open to the public.
Back
返回頂端
關閉選單
Keywords: 文化部
fb youtube mail