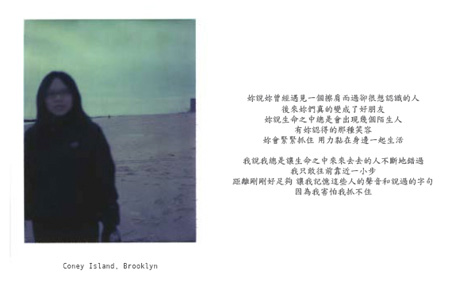 The last day of 2007, Lin and Lee decided to start a 365-day long conversation by exchanging images and writings. This random thought occuring on New Years Eve generated a year long conversation. This conversation consisting of 25 images and writings will be published by Garden City Publisher in June 2009. Meanwhile, Hung collaborated with Jung Hsiang Ke, an artist living in Taipei, creating a visual dialogue across physical distance. Prior to the publication date, Lin and Lee present Short Conversation- a photography, literature and interactive show with Hung, which explores how a conversation crosses the boundaries of time and space.

Hung gave an interpretation for Short Conversation: "A true conversation only exists in a mental and empathic connection." She believes that common life experiences and emotional similarities are the most universal communication languages for human beings, no matter how far they are apart. In Hung's interactive installation, Open Door Open Mind, she used a door, a common daily interface with collective memories, as the subject. In the interaction, while a viewer is opening the small door on a human chest sculpture, an ideal intercommunication also begins.

Lin will also present her collaboration Ignorance from 2006 with Taiwanese artist MingHua Lin as a two channel video installation. Via the internet, they used video as the medium to capture information from two different places. They then shared this information, which they later edited into two different interpretations from their points of view. Thus, they place the viewer in order to obtain their position through confusion and conflict within the real and fictitious realms.