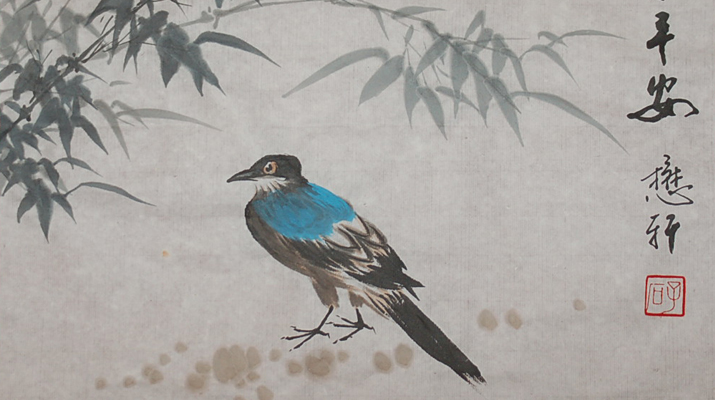 Chinese culture is profound and rich, among which Chinese painting and calligraphy are particularly elegant and aesthetically pleasing. The artistic attainments are both highly intellectual and inspiring. Chinese calligraphy not only displays the beautiful image of Chinese characters, but also presents the philosophy of life through the abstract expression of Chinese characters and through the cultural contexts. Chinese calligraphy is therefore more than mere a branch of visual arts; it is also an enjoyable communication of minds. In addition, Chinese painting shares the joy of similar abstract ideas and inspiration through the presentation of various styles. It is one of the unique artistic achievements calling for our attention.

Chao-Lin Ting was born in Wuhsi County of Chiangsu Province, China in 1914. He retired from the government officer of Taiwan in 1983 and has been living in New York, U.S.A. since then. He has been engaging in the practice of Chinese calligraphy for several decades. His calligraphy is really marvelous, especially his seal script and semi-cursive script. Chao-Lin Ting's calligraphy works have been displayed at several exhibitions in Europe, Asia, as well as North and South Americas, and have won high praise. He also had solo exhibitions at the National Taiwan Arts Education Center and the Cultural Center of Taipei Economic and Cultural Office in New York. As a Chairman of Chinese Calligraphers Association in America, he persistently makes endeavors to promote Chinese calligraphy.

Maw-Chyuan Wang was born at Hsiao County of Chiangsu Province, China in 1932. He had worked as a professor, teaching Chinese philosophy and classic literature in colleges of Taiwan and overseas for more than forty years. In addition, he also writes art reviews and creates calligraphy art. Maw-Chyuan Wang had 31 solo exhibitions in Taiwan and overseas and has been invited to participate in exhibitions for more than one hundred times. He excels in painting landscapes and birds-and-flowers, particularly bamboo and peony.He is also good at various styles of calligraphy, especially the semi-cursive script. Maw-Chyuan Wang has developed a unique style in calligraphy and has made endeavors to promote calligraphy and Chinese cultures. He established Lanyang Painting Association, the Argentina Eastern Painting Association, and American Association of Chinese Painters & Calligraphers. His biography is included in Who and Who of the Chinese-American Artists in the North America and in the Yearbook of the World Chinese Art Masterpieces. He is the Chairman of the American Association of Chinese Painters & Calligraphers and the Chinese Painting & Calligraphy Association of New York.

The Joint Exhibition of Chao-Lin Ting and Maw-Chyuan Wang will be held at the Taipei Cultural Center of TECO in New York from August 28 through September 4, 2009. You are very welcome to visit this exhibition.