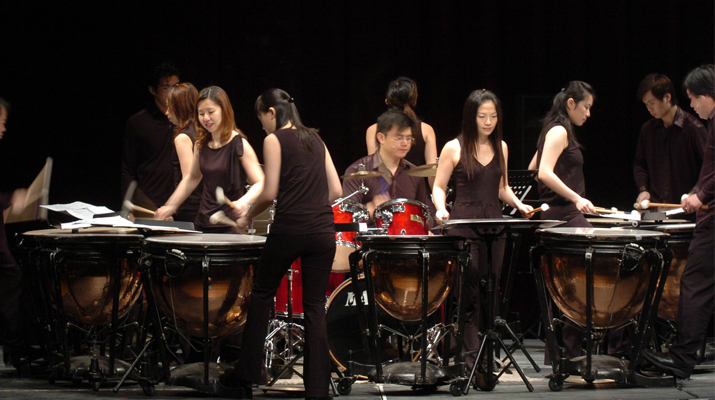 For this American tour, Ju Percussion Group will visit three cities: Los Angeles, Indianapolis and San Antonio. It's the 9th times Ju Percussion Group has visited the U.S. for performance. Among them, the most noteworthy thing is the invitation from Percussive Arts Society (PAS) to perform in Percussive Arts Society International Convention (PASIC). PAS is the largest percussion music organization in the world, boasting 8,500 members. It holds PASIC in November in the U.S. every year, attracting more than 3,000 people in the percussion music community to attend. It's the largest percussion music event in the world.

In each PASIC event, there are more than 150 concerts, master classes and seminars of various sizes. In addition, the topmost percussion music performers from around the world will be invited to perform in PASIC. Their areas of expertise include jazz drum, marching drum, keyboard instruments, timpani, world music, music education, music therapy, new age music and music healthcare etc.

Merging the Tradition with the Modern, and Combining the Oriental with the western Demonstrating an Unique Percussion Music Style

Ju Percussion Group knows very well that "the most representative and the most crowd-drawing professional percussion music group" has been the benchmark for invitation in PASIC Evening Concert. Consequently, the group took special care to plan a performance programme that "merges the tradition with the modern and combines the Oriental with the western." In addition, all the works that will be performed in this programme are all pieces tailor made by famed composers from Taiwan and abroad for Ju Percussion Group including: Hung, Chien-Hui's "Mu Kuei-Ying in Percussion," a work full of Oriental flavors; Ho Hong-Chi's "Drumming Fest" and Aurél Holló's "Gamelan-bound / beFORe JOHN2?;" there are also Emmanuel Séjourné's "Resilience" which is full of western characteristics and Gérard Lecointe's "3 Epilogues." Among them, "Mu Kuei-Ying in Percussion," which incorporates Peking Opera element, and "Gamelan-bound / beFORe JOHN2?," a symbol of Indonesian traditional cultures, are presented to PASIC audiences for the first time. It fully demonstrates the rich and diverse aspect of Ju Percussion Group, which merges Oriental and western music colors to create a unique percussion music style.

Percussion Music Beat Up Peking Opera; "Mu Kuei-Ying in Percussion" Drums Out Loud the Maximum Possibility for East and West

Composed by residence composer Hung, Chien-Huei through deconstructing and reconfiguring elements of Peking Opera,"Mu Kuei-Ying in Percussion"is a work that takes the rich and diverse performance method of the percussion music and imbues it with the vocal style, symbolic body movements and the character personalities from Peking Opera. Performed in collaboration with the famed Taiwan troupe GuoGuang Opera Company, this work keeps the symbolic body gestures and blocking movements of Peking Opera, adds in vignettes of the interaction with the opera troupe, and mixes western music with Chinese opera to stake out a brand new territory for percussion music and Chinese opera. "Running Stream," a song with heavy Oriental colors, is a percussion piece adapted from Yunnan folk song in mainland China. By mixing asian and western music instruments, Hung splendidly highlights the breezy and flowing characteristics of the music.

In "Gamelan-bound/ beFORe JOHN2?" by Hungarian composer Aurél Holló, Indonesia's trademark traditional percussion music "Gamelan" is used as the structure. As an instrumental music, Gamelan is usually performed in important religious ceremonies, special holiday occasions or as an accompaniment to imperial court dance and drama performance. Performers have to be blessed with virtuosic percussion techniques and unwavering concentration. It's a full of Oriental flavor that can show off performers' techniques. In "Resilience" by French composer Emmanuel Séjourné, lighters are used to create rhythms of shivering flames and sparks, thus building a beautiful visual image. Visual and audio elements are utilized to create the vastly different ambiances of day and night. In "3 Epilogues" by French composer Gérard Lecointe, orchestra arrangement is used to allow audiences to enjoy in a fulfilled mood the enchantment of music and the colorful tonality. Not only is it a test of techniques for the performers, the performance result can also display performers' mastery of the music.

All for the goal of the most flawless performance in PASIC Evening Concert, to demonstrate the richness and layers in music, Ju Percussion Group carefully chose its Asian and western music instruments, ending up with as many as 30 big cases of music instruments and more than 2,000 kilograms of luggages in the hope to present an immaculate evening to the audience. As for the Los Angeles and San Antonio shows, although the programmes have been slightly altered due to performance setting, the group will nevertheless present the most exhilarating music to the audience. Using music to engage in interaction with the audience, Ju Percussion Group indeed creates a borderless exchange and emotional rousing for the culture and inspiration of percussion music.
Back
返回頂端
關閉選單
Keywords: 文化部
fb youtube mail