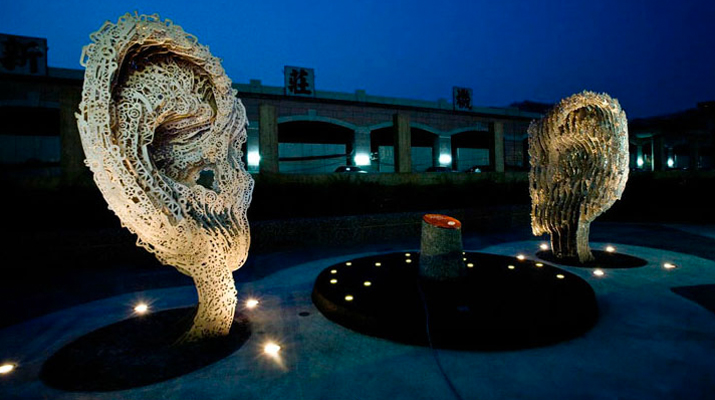 The exhibition, "Beyond the Mirage: Taiwan New Media Art", supervised by Council for Cultural Affairs and organized by Taipei Cultural Center, Taipei Economic and Cultural Office in NewYork and National Taiwan University of Arts, is curated by Chen Yung-Hsien, who is interested in the digital representations within the current technological era. The exhibition addresses the existing relationship of mirage within New Media Art and discusses the interlacing issues of electronic interface and visual perception. For this exhibition, Chen Yung-Hsien has invited three artists: Sung Hsi-Te, Huang Hsin-Chien and Tseng Wei-Hao to exhibit their newest works which include dynamic sculptures, interactive performances and sound installations. The exhibition will also include a selection of works by Animation Tropes, a group of new generation Taiwanese artists including: Lin Chin-Yu, Chang Kuang-Hsiang, Ma Kuang-Pei, Chen Li-Chuan, Wang Wei-Xiu, Chang Shu-Wei, who have each exhibited at several international film festivals. The selected animation works are based on subject matters which relate to local Taiwanese culture and that further display the unique style of animation being generated in Taiwan today.

ART ASIA Miami 09 - International Asian Contemporary Art, will present New Media Art from Taiwan for the first time. Its presentation will not only encourage cultural exchange and enable new audiences from the international art scene to be able to see the exquisite works made by the local Taiwanese artists, but it could also bring Taiwanese contemporary art to prominence across in the international scene.