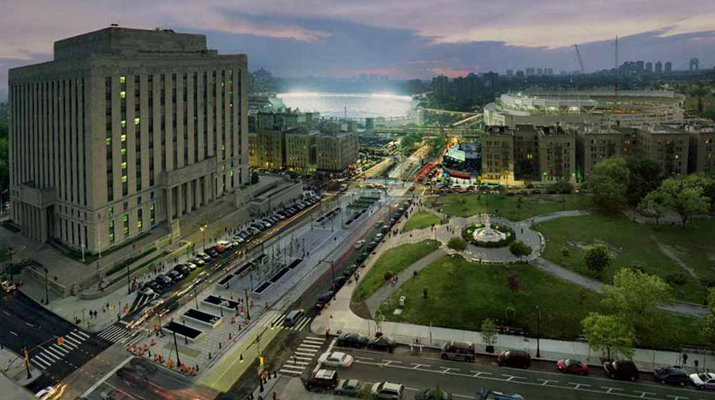 TBRONX, NY-The Bronx Museum of the Arts has commissioned the award winning photographer Jeff Chien-Hsing Liao to range throughout the streets, parks, and alleys surrounding the Grand Concourse and create a photographic portrait of the borough of the Bronx as it is today-vital, teeming, and changing. The photographic commission came as part of the Museum's year-long commemoration of the centennial of the storied Grand Concourse.

And now the results are in. A bravura series of 12 large-format, technically complex color photographs will go on view at the Bronx Museum beginning Sunday, August 2, 2009 (through January 4, 2010) in Intersections: The Grand Concourse Commissions.

"Jeff has caught the hum, the concentration, of The Bronx, where every day a melting pot of New Yorkers goes about the business of daily life, so often with brio," says Holly Block, Executive Director, The Bronx Museum of the Arts.

Liao's Bronx series features several vast and virtuosic panoramas of the Grand Concourse, including two 128-foot wide, hyper-detailed panorama of every building on the thoroughfare, which seems to envelope the viewer, and an incredible south-facing view from high atop Tracy Tower. Other photographs burrow into the quotidian. In a picture of a crowded barber shop, Liao's eye seems to settle on a television screen of talking heads, a barber bent over a drowsy young boy, and an older boy gazing at a computer screen under a mirror that catches the barber. The viewer marvels at the color, surfaces, and gestures, the incident and seeming accident, packed into this picture of an ordinary afternoon.

While Liao's approach appears to be straightforward documentary, in fact each photograph contains more than can be captured in one frame. To create one large-format photograph, the photographer will spend an entire day shooting Kodak 8-by-10 color film and high end digital camera. He then transfers a number of these frames (as few as 30; as many as 2000) into digital form. From these he digitally "pieces together" an image that neither the eye nor digital technology could produce alone, such as the photograph Yankees Stadiums, Subway series 2008. This 8-ft.-wide, birds-eye view of the new and old Yankee's stadiums captures the sun setting in the background. Yet on close examination, the viewer will notice a golden afternoon light bouncing off the cars below and the glow of nighttime lights in the new stadium proper.

"I wanted to show the lushness and the vibrancy of the borough," says Liao. " lot of the photography of the Bronx is negative. So I was surprised when I began this project at how alive the streets are with activity."

Jeff Chien-Hsing Liao(b. 1977 Taiwan)
Taiwanese-born photographer now based in New York City, where he earned an MFA from the School of Visual Arts and a BFA from the Pratt Institute. He is the first prizewinner of the New York Times "Capture the Times" photo contest. Liao's work has been featured in several solo and group exhibitions, and is represented by private and public collections, including JGS Inc. Foundation, Museum of Fine Arts in Houston, Queens Museum of Art in New York, J. Paul Getty Museum, George Eastman House, Norton Museum of Art and Deutsche Bank. His photographs have been widely featured in publications, including Art in America, ArtNews, Camera Art, Photo District News, the New York Times Sunday Magazine, and the Village Voice.His new monograph, Habitat 7, is published by Nazraeli Press in 2007. He is represented by Julie Saul Gallery.

Sponsorship
Intersections: The Grand Commissions is made possible by the J. Ira and Nicki Harris Family Foundation; Council for Cultural Affairs, R.O.C., in collaboration with Taipei Cultural Center of TECO in New York; Graham Foundation for Advanced Studies in the Fine Arts; National Endowment for the Humanities; Paul and Klara Porzelt Foundation; U.S. Institute of Museum and Library Services; New York State Council on the Arts, a State Agency; and Kodak.

The Bronx Museum of the Arts
The flagship cultural institution of the Bronx, founded in 1971, The Bronx Museum of the Arts focuses on 20th-century and contemporary art, while serving the culturally diverse populations of the Bronx and the greater New York metropolitan area. The museum's home on the Grand Concourse is a distinctive contemporary landmark designed by the internationally-renowned firm Arquitectonica. The Museum's educational offerings spring from these central programs with outreach to children and families as well as adult audiences.
Back
返回頂端
關閉選單
Keywords: 文化部
fb youtube mail