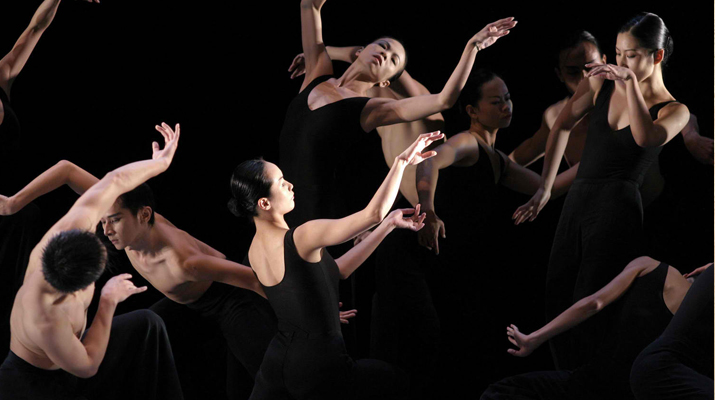 With the 24 virtuoso Cloud Gate dancers trained in the Western and traditional Chinese disciplines, including modern dance, classical ballet, meditation, martial arts, chi kung, and calligraphy, the founder and artistic director Lin Hwai-min, an internationally renown choreographer heralded as "the most important choreographer in Asia" (Berliner Morgenpost ), has created a unique dance language that prompts Dance Europe to acclaim "No company in the world dances like Cloud Gate... It presents a distinct and mature Chinese choreographic language. The importance of this evolution in Asian dance is no less profound than the impact of Forsythe's Ballett Frankfurt on European classical ballet."

Topped the list of the best dances in 2003, selected by the chief critic Anna Kisselgoff of The New York Times, Moon Water has been presented by festivals and venues all over the world, receiving rave acclaims since its premiere in 1998.

In Moon Water, Bach's cello suites and Lin Hwai-min's Tai Chi blend together as if they had waited for each other for hundreds of years.
-- Ballet International

Mr. Lin has accomplished what creative artists rarely succeed in doing today: challenging the audience with a work unlike any other.
-- The New York Times

Moon Water owes its movement motives to Tai Chi Dao Yin , a chi kung exercise that can be traced back to more than 2000 years ago. Taking inspirations from a famous Buddhist proverb, "flowers in a mirror and moon on the water are both illusory," Lin Hwai-Min transforms Tai Chi Dao Yin into an original and expressive dance vocabulary. Set to J. S. Bach's Six Suites for Solo Cello recorded by Russian cellist Mischa Maisky, Moon Water features a simple stage set with mirrors at upstage and hung in mid air. Towards the end, water seeps onto the stage, and the wall of mirror reflects the water and the soaked dancing bodies. "The entire stage is transformed into a mirrored cabinet. Reality and appearance melt inseparably into each other. In an unforgettable final image, the dancers seem to move as though on clouds in a celestial landscape?magically removed from all worldliness." [Ballet International]
Back
返回頂端
關閉選單
Keywords: 文化部
fb youtube mail