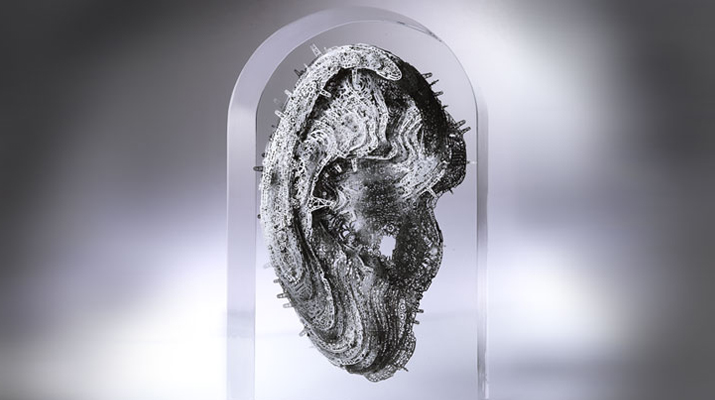 Hsin-Chien Huang currently lives and works in Taipei, Taiwan. After graduating from National Taiwan University's mechanical engineering department, he got his B.A. in Art Center College of design, Pasadena. And then he acquired his M.S. in Institute of design in Illinois Institute of Technology, Chicago. He had work with computer entertainment companies like Sega and Sony as art director and collaborated with media artist like Laurie Anderson.

He is the only Taiwanese artist who was invited by Bryce Wolkowitz Gallery. Hsin-Chien's works merge interactive technology and time-honored aesthetics. He invites viewers to participate in his poetic and surreal creations, which have significance associated to real life philosophical meanings.

And his creation "Shall we dance, Shanghai?" is the only interactive installation in this unique exhibition. "Shanghai" project turned Shanghai's buildings into dynamic objects and followed people's movement. It was a huge success at 2008 Shanghai Biennial, and currently exhibiting at OK Center in Linz, Austria until January 2010. Along with this piece, there are three other digital sculptures will also be shown in this event.

"Speed and Chaos: Into the Future of Asia Art" Group Exhibition also includes Korean Artists, Noh Sang-Kyoon and Junebum Park. And Artists are from China, Wang Qinsong, Xu Changchang, Hu Jieming and Miao Xiachun. They will display their creations in moving images, installations, and other forms to present the energy and future of Asia Art to New York viewers.
Back
返回頂端
關閉選單
Keywords: 文化部
fb youtube mail