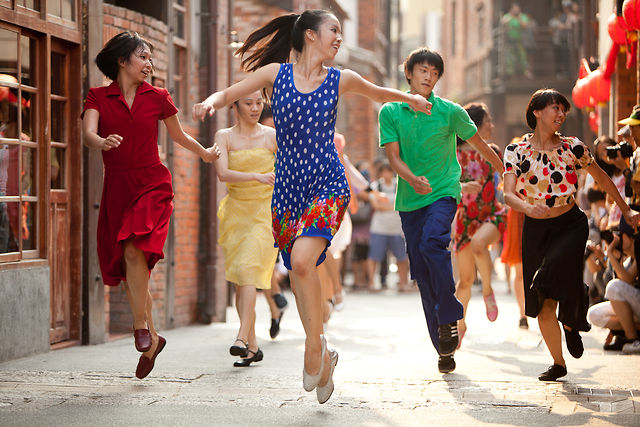 1875 was the year in which the composer Ravel was born; his work Bolero came into being in 1928. The development of the dance begins with the music, that every-repeating motif like a life
draining away as time accumulates. What was that moment like, in which I first became aware of, ?rst felt deeply, this thing? my life, my existence?When do we feel what it is like to live? And as the city endlessly changes its face, do we have no choice but to press forward? 1875 represents the moment each life came into being, and the memory of those moments.

This is how Taiwanese choreographer Shuyi Chou explains the notion of "living in the moment" embodied in his work ?1875 Ravel and Bolero?. In the endless repetitions of the motif that wind through Ravel's work Bolero, Chou sees the crests and waves, the high points and low points, of a human life?and he hopes that we will all face the challenges of life with lightness and optimism. Chou created the work in 2006; in 2007 the work was adapted and performed in Taiwan for the ?rst time, and in 2009 it won ?rst place in the ?rst online Global Dance Contest held by the London performing arts center Sadler's Wells. In 2010 Chou traveled to Sadler's Wells with a troupe of 12 dancers to present two performances of the piece, which was received ardently by fans.

Taiwan's most influential performing arts magazine, PAR, has called Chou ?a precocious and brilliant dancer whose motions convey a grace and purity.? His work ?1875 Ravel and Bolero? has won awards in numerous major dance competitions; it is a bright star in the constellation of Taiwanese dance which has begun to dazzle on an international stage. Chou, who began his career as an independent choreographer in 2003, takes the dancer's limbs as a starting point, relentlessly pushing the limits of personal creative vision in an attempt to create a performing art form that merges diverse elements. His works were chosen twice
for the National Chiang Kai-Shek Cultural Center's ?New Idea Dance Showcase?; his work ?Street Lamp?was selected in 2004 for Cloud Gate Dance Theatre 2's first Seed Choreographers Dance Project and won a gold medal in the ?Dancing Across the Earth?
dance choreography competition. In that year Chou joined the dance troupe HORSE, and in 2009 he won fellowships from the Asian Cultural Council and the Taipei Artist Village to attend residencies in New York and Paris. In 2008, with the help of a fellowship from the Lo Man-Fei Dance Fund, he choreographed and performed his solo dance piece ?Start With the Body?; which in 2010 won a bronze medal in the 3rd Cross Connection Ballet International Choreography Competition in Copenhagen, Denmark.

This production was made possible, in part, by a grant
from the Lo Man-fei Dance Fund, Cloud Gate Dance
Foundation, Taishin Bank Foundation for Arts & Culture,
Chin-Lin Foundation for Culture and Arts, and Asian
Cultural Council.